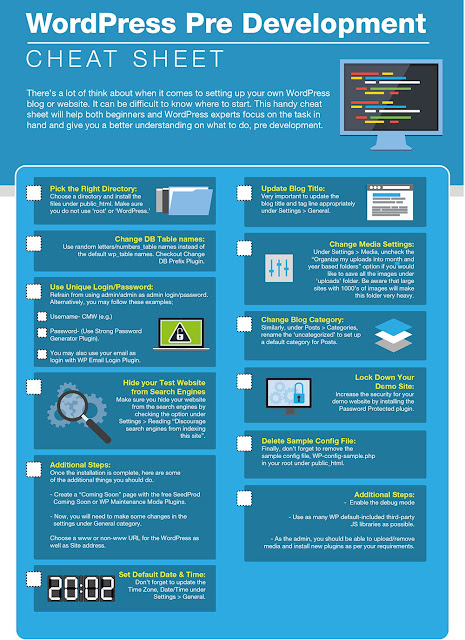 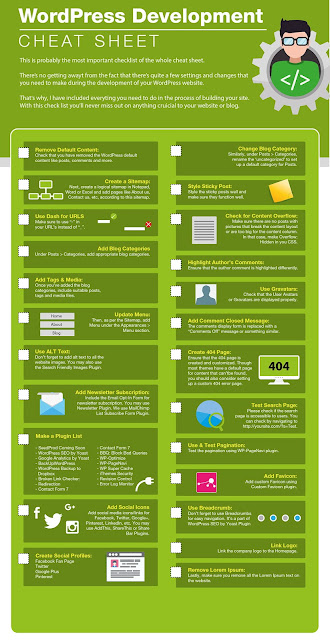 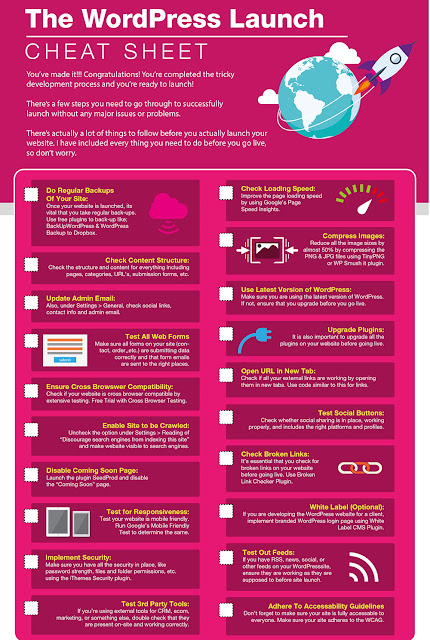 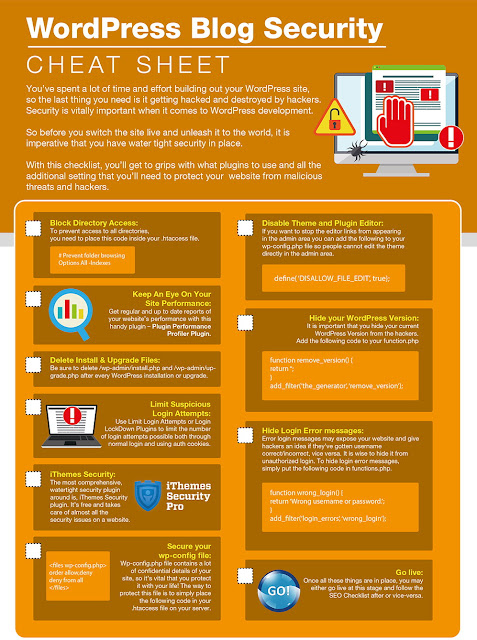 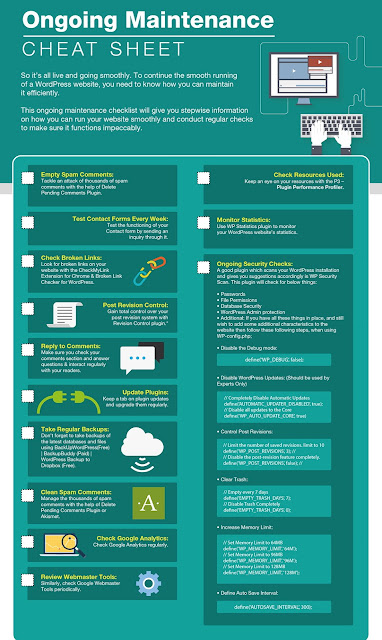 Posted by Edward Anil Joseph at 5:19 AM No comments:

How to make your Wordpress site secure

•  Beware cheap ($5-$10/month) shared hosting accounts.
•  Look for hosts with experience hosting WordPress sites.
•  Look for hosts with solid support.
•  Look for hosts that are transparent: who communicate quickly and post issues online.
•  Make sure your host does regular backups that you can access.
•  Call your potential host to find out which versions of Apache web server, MySQL, and PHP they’re running. Check the version release dates with a Google search.
•  Ask your host for written documents containing their server data backup, failover, and update or maintenance policy. If they don’t have them, find another host.
•  Recommended hosts: WP Engine and ZippyKid

•  To harden your WordPress install, follow these steps.
•  Keep WordPress, themes, and plugins up to date. Always. Period.
•  If you’re unsure about how to update WordPress, themes, and plugins, hire someone to do it for you.
•  Backup your site before you update WordPress, themes, and/or plugins.
•  Disable unused user accounts.
•  Never use “Admin” as your username. Ever.
•  Grant users the minimum privilege they need to do their jobs.
•  Require strong passwords.
•  Use 1Password or KeePass to create strong passwords.
•  Use a different, strong password for every site log in.
•  Lock down the WordPress admin dashboard (/wp-admin) using an .htaccess file.
•  Use SFTP to access your web host.
•  Enable SSL on your WP install.
•  Change your passwords once a month. Set a reminder in your calendar if you have to.
•  Do backups. Recommended: BackupBuddy, VaultPress
•  Set file permissions at 644 and 755 for folders.
•  Ensure that the permissions on wp-config.php are not world readable especially in a shared hosting environment.
•  Consider adding HTTP authentication to your /wp-admin/ area.
•  Read Sucuri.net’s blog.
•  Read Google’s security blog.

•  Look for WordPress Plugin API hooks, actions, and filters.
•  Look for properly sanitized data and MySQL statements, unique namespace items, use of the Settings API for any plugin settings or options.
•  Look for plugins that use nonces instead of browser cookies.
•  Check out how quickly the developer responds to support requests.
•  Check out forum threads to see how well the plugin is supported.
•  Is the developer a known and respected member of the community?
•  Look for a plugin that does one or two tasks really well.
•  If two plugins do similar things, choose the one with the higher download count.

YOU’VE BEEN HACKED. NOW WHAT?

•  Take the site offline. Now. That way you avoid getting a bad rap from search engines and antivirus programs.
•  Let your web host know what happened.
•  Make a full backup of the infected site. It’s helpful for reviewing what happened and in case you mess up something during the repair.
•  Change all of your passwords and the authentication keys in the wp-config.php.
•  Remove any old themes, plugins, and unused code from your server.
•  Update all code on your server. Re-install WordPress so all of the WordPress files are overwritten with fresh copies.
•  Reinstall themes or plugins with fresh copies to make sure no malicious code was inserted.
•  Check that the file permissions on your files are correct, especially wp-config.php and uploads.
•  Remove the rogue code and make sure you check all sites on your hosting account. There are tools that can help scan and clean the infection such as VaultPress. Exploit  Scanner also scans for certain exploits.
•  If you don’t have the ability to fix the infected files the best thing to do is restore from a recent clean backup.
•  Check your server access logs. Search for any bad file names that you found on your server, patterns passed as query strings, or dates/times that may clue you in to when the attack happened.

Deadlocking occurs when two user processes have locks on separate objects and each process is trying to acquire a lock on the object that the other process has. Usualy, they have different incompatible locks which are illegal or conflict (as per the compatible mode on locks).When this happens, SQL Server identifies the problem and ends the deadlock by automatically choosing one process and aborting the other process, allowing the other process to continue. The aborted transaction is rolled back and an error message is sent to the user of the aborted process. Generally, the transaction that requires the least amount of overhead to rollback is the transaction that is aborted.

Identify Deadlock:
Here are some tips on how to avoid/resolve deadlocking on your SQL Server:
The list really goes on. The solution will vary from situation to situation.

Cloud development: 9 gotchas to know before you jump in

Whether developing, testing, or deploying your apps in the cloud, you have to unlearn some beliefs and learn new ones to make it work

Although technology executives and developers with experience in cloud-based development say there are clear benefits to developing in these environments -- such as costs savings and increased speed to market -- they also caution that there are challenges and surprises to look out for.

Gotcha 1: The cloud doesn't always work like the "real world"
Developers might find that the configuration they use in production is hard to replicate on cloud services. For example, with an application you develop in the cloud before bringing back to run locally, you might need to test against a legacy system that you can't simply copy onto a cloud service
Gotcha 2: Some apps aren't ideal for development in the cloud
The more hard-to-access or hard-to-replicate systems an application integrates with, the more difficult it is to develop and test it on cloud computing resources
Gotcha 3: Developers often dislike the unfamiliar cloud territory
Cloud computing is still relatively new to a lot of organizations, and it can be a disruptive technology, including in the development arena.
Gotcha 4: Lack of documentation hinders cloud developers
There is a lack of documentation to help developers understand the cloud and the tools and resources that can be used to build applications in that environment.
Gotcha 5: Network issues can bedevil private cloud environments
Developing in the cloud sometimes means developing in your own private cloud, which may not have the multitenancy and load-movement capabilities that keep your applications available 24/7. Other issues that can affect development and testing involve network delays and latency and the size of network pipes, especially in certain parts of the world.
Gotcha 6: It's easy to let the meter run unnecessarily on the cloud
Another potential problem is wasting money on cloud fees. Developers can easily forget or neglect to turn off virtual machines they aren't using. When it was on an in-house, capitalized server, this was no big deal. But when it is on usage-metered, leased resources as with public cloud computing, this is a waste of money
Gotcha 7: Cloud licenses can contain surprising deployment restrictions
Among the nontechnical issues with the cloud that can have an impact on development are licensing restrictions.
Gotcha 8: Integration can be harder to troubleshoot
Integrating new applications with existing ones can be a key part of the development process, and the cloud brings even more challenges from an integration perspective.
Gotcha 9: The cloud's fast pace of change can be hard to keep up with
Being on a quickly evolving cloud development platform, like Azure, means it's necessary to update best practices frequently

Despite the learning curve, cloud development is appealing
Despite the potential challenges, for many organizations application development in the cloud rather than sticking with traditional methods makes sense, for the same reasons that cloud computing in general makes sense: elasticity of resources and cost, and reduced operational complexity, both of which lead to shorter completion time.

This article, "Cloud development: 9 gotchas to know before you jump in," was originally published at InfoWorld.com.

Posted by Edward Anil Joseph at 11:32 PM No comments: